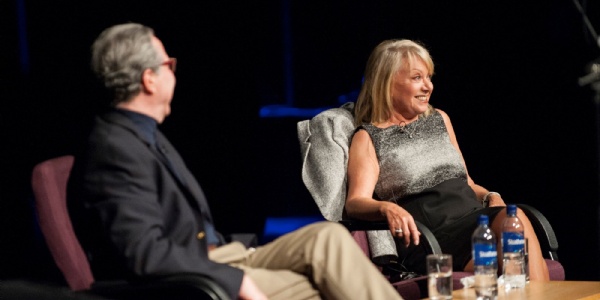 Her wide-ranging talk, chaired by LIPA’s CEO and Principal Mark Featherstone-Witty, spanned the gamut of her whole career, from her break-out role as Eva Peron in Evita, through to her iconic turns as Norma Desmond in Sunset Boulevard and Grizabella in Cats. Her discussion was interspersed with clips of her most well-known performances, which were cheered enthusiastically by a packed audience. This was made up of students studying degrees at LIPA and LIPA Sixth Form College students.

With students from both institutions preparing for sustained careers in the performing arts, Elaine began by recounting how she persevered with her efforts to get into show business. Having attended the Aida Foster Stage School in London, her first audition led her to look through the pages of a phone book to select a stage name before finally settling on “Paige”. She also stressed the value of persistence in the face of rejection, describing how a chance meeting with Dustin Hoffman encouraged her to continue after an unlucky run of near-misses at various auditions: “He was very complimentary about my voice… He filled me with confidence. Meeting him changed everything for me.”

Elaine also gave audition advice to performers, focusing on the need for diligent preparation: “The key is to have as much information as you can about the character you’re auditioning for. Choose audition material that is suitable to showing off your gifts as appertaining to the character.” Elaine revealed the extent of her rigorous research to audition for Evita, during which she repeatedly listened to the show’s music and researched the historical figure of Eva Peron. She used a similar process to develop the character of Sunset Boulevard’s Norma Desmond, which she described as:

“one of the great roles for women in modern musical theatre… one of the greatest parts I’ve ever played”. She explained, “I got the old movie out… I did quite a bit of research into other silent movie stars, and then read and learned the score over and over to try and find this character… and find her vulnerabilities.”

Having played some of her most famous roles for significant spans of time, including a 20-month stint in Evita, Elaine gave performing arts students tips for sustaining themselves over the course of a long run. “Eight shows a week is difficult if you’re playing a major role. It’s physically demanding… so your concentration level has to be at a peak… If your name is above the title you have a responsibility to the producer, the company and to the public who have bought tickets to see you, so the pressure when you’re headlining a show like that is enormous… If you’re in peak health to go on stage every night, you have the joy of being able to play these wonderful roles and… give enjoyment to people.”

To conclude the talk, Elaine gave the students some final words of wisdom: “Good luck! Work hard – you have a fantastic establishment here… you’re so lucky. Be like a sponge and soak it all up!”