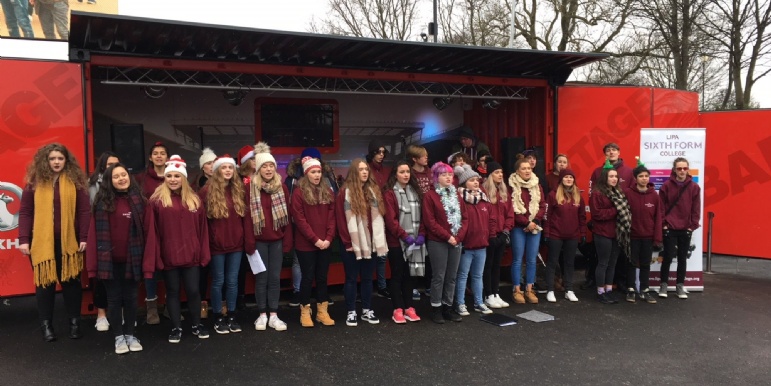 Students at LIPA Sixth Form College performed to tens of thousands of people after being invited to sing carols at one of the region’s biggest sporting events.

The choir, made up of 45 students, were inside Anfield stadium for the Merseyside derby and sang to supporters as they made their way to their seats ahead of Sunday’s Liverpool v Everton game.

Music lecturer Brian Campbell said: “This was the biggest performance the students have done to date, and a great occasion for them to showcase their talents while entertaining so many people.

“This was a wonderful opportunity for our students to gain valuable work-based learning through working with Liverpool FC.”

The students performed a mixture of contemporary and traditional Christmas songs and returned to Anfield, which has a capacity of 54,000, later the same week to perform before Liverpool’s game against West Bromwich Albion.

Yonit Sharabi is from Liverpool FC: “The choir were magnificent and truly brought a festive feeling to Anfield with their amazing performance.”